For over fifteen years, in cooperation with universities and in close collaboration with industrial providers of household appliances, the Nordhorn-based kitchen accessories specialist Naber has developed innovative accessories for the area of exhaust air technology. The aim is both to create a healthy indoor climate in which the occupants feel comfortable, and to permanently protect the structure of the property against damp.

Regardless of whether it’s a closed kitchen or a spatial solution in which kitchen, dining and living areas merge, the kitchen is one of the rooms in the house in which excessive amounts of moisture are generated: in a 100 sqm flat, at 20° C room temperature and 55 percent relative humidity, there are 2.3 litres of water in the air. In the course of 24 hours,up to ten litres of water accumulate in such a household. Breathing alone creates 4.8 litres, the rest is produced through activities such as showering, cleaning, drying clothes etc. and of course through cooking.

Without a corresponding ventilation system, the steam produced during cooking can precipitate and condense on the walls and windows, which, over time, can lead to the formation of mould and damp patches in the grouting, on the wallpaper, on the walls and ceiling.
Since the temperature in the kitchen varies so greatly, considerably more substantial damage is possible here than in other rooms. In modern, highly insulated residential buildings, "natural air exchange", carried out by opening a window or through air circulation within the flat or house is no longer sufficient. The reason: since the vapours are carried away by unguided air flows, heavy components of the cooking vapours, such as oils and grease, often accumulate on walls, furniture and other objects, not just in the kitchen. Here, the only solution is a kitchen hood which enables a "dynamic air exchange", removes the vapours by means of a guided air flow and also filters grease, odours and moisture from
the air.

Extraction: the only good alternative

The more individual the architecture and interior design, the more care needs to be applied when planning a kitchen to the topic of ventilation and extraction and how these can be achieved together with a modern extractor hood. In times when a lava stone or Teppanyaki grill are increasingly among the sophisticated electrical appliances in a kitchen, an efficient extractor hood is more necessary than ever to prevent cooking odours from spreading throughout the entire home.

Two different operating systems are available, the exhaust air and air circulation systems. In both cases, the hood absorbs the vapours at their source – the cooking area - and filters them. With the exhaust air technology, the filtered air is ideally conducted to the outside. Using circulating air however, the air is conducted back into the kitchen. This helps combat grease particles and odours. However, what remains is the moisture. Damp air which is constantly sucked up by the hood and blown back into the room absorbs more moisture each time. After all, when cooking, approx. 0.5 to 1 l of steam is created per meal. To dissipate the moisture, the only option is to fully open the window for several minutes, (rush
airing). Heat loss is thus unavoidable in the cold seasons.

Exhaust air technology is, according to Naber’s findings, the most effective system. Here, the air loaded with grease, oils and odours is conducted directly from the kitchen to the outside via an air duct along with the excess air moisture. The fan is mostly located in the extractor hood itself. However, devices are also available with an external fan which is mounted, for example, on the outside wall or in the kitchen base (downdraught). Metal mesh grease filters ensure that no greasy film accumulates in the kitchen and possibly in open, adjacent rooms. In the long term, this also has a positive effect on the building structure and helps to avoid structural damage.

Prerequisites for a functioning extractor hood:

Exhaust air technology – guarantee for a healthy indoor climate in the kitchen - 22.09.2016

We expressly point out that, based on the image rights transferred to us, the use of the following images is only permitted for the advertising of products obtained from Naber or for use in editorial reporting on Naber. In particular, passing on images/illustrations/graphics to third parties and/or their use for other purposes is prohibited! 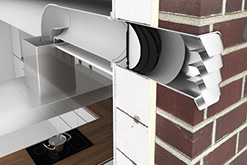 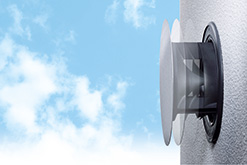 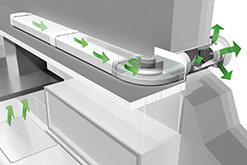 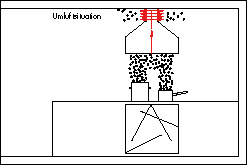